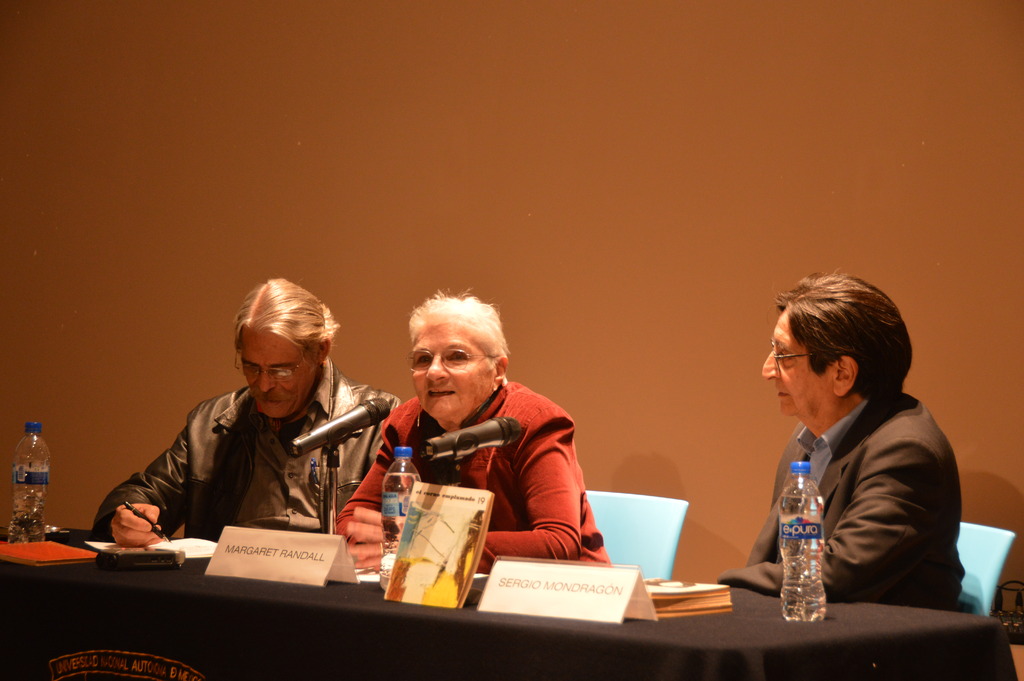 Giuliana Prevedello and Lorena Botello, postgraduate students in Art History at the Autonomous University of Mexico (UNAM), sent us an email that read: “Margaret Randall says she can travel to Mexico City to participate in our event. She is able to come at the beginning of January . . .” Margaret’s trip to our country would be legendary in the context of two projects: siete.de.catorce, the graduate exhibition curated by the students of Curatorial Studies in UNAM’s Masters in Art History program, organized by University Collections Gallery at the institution’s Tlatelolco Cultural Center, and the Research and Curatorial Seminar hosted by the Center of the Image where she would also deliver a lecture and take part in a conversation.

An academic invitation allowed us to take advantage of the bureaucracy with its economic possibilities. For us—students, readers and researchers of the 1960s in Mexico—it meant the realization of a long-held dream: we were intensely interested in knowing and listening to Margaret Randall. We were intrigued by her devotion to collective work, and by her words that had been such constructive elements on the infinite barricades of social struggle on the wings of poetry. We wanted to hear about her life as a poet familiar to us from the time of the Vietnam War and its aftermath, a shooting star to Central America and the Caribbean, her role as a mother. We wanted to personally thank her for her presence in this world, for having shown us new possibilities at every step along her journey. A constant antagonist of power and of the Cold War history that is such a part of relations between the United States, her country of birth, and Mexico, her second country of birth (to be followed by many others).

siete.de.catorce is a series of exhibitions coordinated by the US (almost Mexican) art historian James Oles, a delirious curatorial exercise to which Botello and Prevedello contributed a small but stimulating exhibit called El Corno Emplumado, A Magazine from Mexico City. It was the first to display (almost) all the issues of El Corno—founded by Sergio Mondragón and Margaret Randall in 1962—alongside contemporary Latin American publications in which are to be found the political ideas, experimentation in the graphic arts, and literary proposals of so many revolutionary artists who shaped language and created new meanings. In order to call public attention to the worldwide web of independent journals generated by El Corno back then, the postgraduate students constructed a space that suggested Randall’s and Mondragón’s adventure. And in that space they also included the work of visual artists who contributed to the journal.[1] 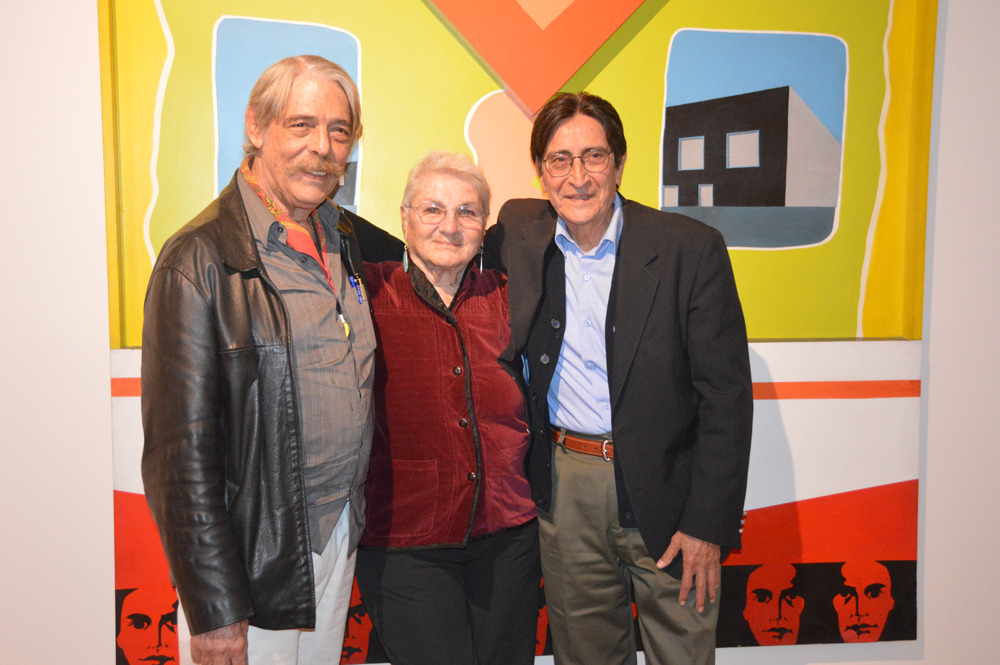 But with all the problems implicit in borrowing copies of magazines and other documents, arranging for their transfer and setting up the exhibit, the clock was ticking and the funds we needed failed to appear.[2] Months went by, and institutional contacts proved insufficient. “University policy requires that the flights of visiting academics can only be purchased in the year in which travel takes place,” the university accountant told us in a curt email. On January 9, 2015, at 4 p.m., five days before they were due to travel, we sent Margaret Randall and Barbara Byers their round-trip tickets from Albuquerque to Mexico City (with a change of planes in Dallas). Looking back, keeping them waiting seems like a case of bureaucratic torture, and their willingness to put up with the wait a case of absolute faith in the committee of crazies who wanted them to come.

They arrived on January 13th at 5 p.m. on a flight that was two hours late. We picked them up in Benito Juárez International Airport’s Terminal 1, and drove them to Casa Stella, the small hotel on Amsterdam Avenue where they would be staying. After a brief but painful accidental crushing of one finger in a door, the two women got settled and we went to grab a bite at a nearby Japanese restaurant. Over dinner we shared information about our respective countries. They spoke of the epidemic of racist citizen murders by US police. We spoke of the 43 students disappeared from the Raúl Isidro Burgos Teachers School in Ayotzinapa, Guerrero. They told us about the yearly writing workshops at the Jack Kerouac School of Disembodied Poetics. We discussed femicide, gay marriage, and our disenchantment with Buddhism.

We can’t remember the order of these conversations because they continued non-stop throughout their visit. We were on the same journey to make visible our place (or lack of place) in a fractured state that buries its dead without telling their families. We confirmed the visits we would be making during the week: to the Frida Kahlo Museum, Sor Juana Inés de la Cruz’s “cell,” and the latest excavations at the Templo Mayor. The city was happy to have them and everyone helped with these plans. It had been a long day. They slept while we began working on the Spanish translation of the text Margaret would read days later at UNAM’s Tlatelolco Cultural Center.

“How Poetry Illuminates My Understanding of History” is the name of the lecture Randall delivered on Wednesday the 14th at 10 a.m. at the Center of the Image. The audience consisted of specially invited guests, our colleagues from Tlatelolco, and students and professors from the Seminar, most of them historians. Margaret took us to moments of her own history, to groups of Beat poets and conversations with those from Black Mountain, to Vietnam, Nicaragua, and the core of her own poetry. A lot happened as this 78-year-old woman read. Poetry clarified spaces of confusion and ambiguity in the history she had witnessed. Her 27-page text moved from poetry to theory, from literature to a beautiful narrative of her own volatile life. She spoke to us of places of refuge and places of freedom, beyond (or before) the official story’s authoritarian stance. As she read, she awakened emotions as she stimulated a reflection on poetic forms as spaces of freedom (allowing us to emerge from our disciplines, to dare to play). She invited us into multiple versions of writing when confronting the monoliths of historic “truth.” As if a thousand doors opened to the depths of her inexhaustible heart, we listened to Ginsberg’s “Howl” from a new place, the voice of a woman who had heard so many men read poetry as the feminist revolution surged.

Following the lecture (and tea), Margaret sustained a conversation with the Colombian literary historian Katia González. Together they elaborated on how to think about the Sixties, the problems faced by young researchers and artists when they look at an era about which nothing and everything has been written. If we look to that era today, it is because we need it; this was one of the hypotheses that floated in the air. Margaret was moved by the questions from the audience. That afternoon, after the public conversation and a few blocks from downtown, we “ate Yucatecan” (joking with Barbara about how they say in English “we ate Chinese”—meaning we ate Chinese food, not Chinese people).

In Tlatelolco on Thursday at 7 p.m. we held a fascinating roundtable. For the first time in more than 45 years Margaret Randall and Sergio Mondragón, founders and coeditors of El Corno Emplumado, came together to give us their memories of its history. The visual artist Felipe Ehrenberg, dear friend from those times, also participated. Each of them told the story, with its labyrinths and conclusions. Margaret read a text in which she narrated her arrival by Greyhound Bus with her son Gregory, the poetry readings that took place at Philip Lamantia’s apartment in Colonia Juárez, and the vision that she and Sergio had at the time. North and Latin American poetry didn’t yet have a common ground. A bridge had to be built. And she told us much else: about the birth of El Corno and their children, the Movement of 1968, separations, clandestine life, and exile. Her text is a better witness than these words of ours.

Sergio began with the description of an event about which few of us were aware: moved by an interest in Abstract Expressionist painting, he had interviewed David Alfaro Siqueiros. He provided us with an incredible key to his own work, the early presence of the visual arts in his poetic vision. His profound observations pierced our perspectives on the history of recent Mexican art. And he didn’t stop there. There was no reason to. He also took us to Lamantia’s apartment and, as if in free fall, we traced the history of El Corno, the children, the ruptures, until we suddenly came to the very spot where this event was taking place: Tlatelolco, a place stained with the blood of disappeared students, each and every one of them, in each and every one of our times. Striking his fist on the table and with broken voice, Sergio ended his intervention. He had conjured ghosts.

Randall and Mondragón’s talks complimented one another. It almost seemed as if they had planned their texts: a logical list of the positive and negative, two potent views. Perhaps Randall tried to be more objective, while Mondragón prioritized emotion. Ehrenberg, like all those who listened, was deeply touched. When he began speaking, his deep voice trembled as he told a story about one of Margaret’s birthdays and about his joy as all their children grew.

It was a public event and the public too was moved, as if in shock. Thousands of slivers of a history lay bare before us: the history of poetry in Mexico (and it was all articulated: the revolution, the idea that we would be able to change everything, create a less terrible, less arbitrary and authoritarian world). We were all right there.

Two days later, in the same venue, Margaret would give us a bilingual poetry reading accompanied by her friend and translator María Vázquez Valdés. It was intimate and powerful. “Everyone Lied” was one of those poems that reverberated in the hall. Barbara never stopped drawing, writing, drawing, writing, during each of the events, her pen moving at the slightest provocation. That night, at the home of one of Margaret and Sergio’s daughters, we all ate mole prepared with a special chile from Oaxaca.

This text is a partial version, a brief story that without doubt contains many omissions and silences. We send it along even as we retain the taste of those marvelous days. And above all, we still tremble with the memory of a plumed horn[3] powerfully blown by its creators.

Written from emails and wall labels

guilty as well of this delirium.

[1] The exhibit gathered journals from a number of Latin American countries. Sergio Mondragón lent us his almost complete set of El Corno Emplumado (not without visiting us first in order to make sure we weren’t spies or members of some reactionary guerrilla movement). At several of UNAM’s libraries we found copies of Espiral from Colombia, Casa de las Américas from Cuba, Cuento, El rehilete, La palabra y el hombre, Pájaro Cascabel and Punto de partida of Mexico, El pez y la serpiente of Nicaragua, and Rayado sobre el techo of Venezuela. Saúl Ibargoyen lent us his own Aquí poesía along with other books from his youth.

[2] As part of our inter-institutional collaborative proposal, the Center of the Image requested the money for Margaret’s flight from the Office of International Affairs of the National Counsel for Culture and the Arts. They asked us for a letter delineating the writer’s trajectory along with our justification of the importance of her trip to Mexico. Immersed as we are in the midst of a silent operation of cultural repression and artistic censorship that Enrique Peña Nieto’s administration has inflicted upon state institutions (and also those of the private sector), four months later our request was denied.